Yu-Gi-Oh! ARC-V ( Yūgiō Āku Faibu, lit. King of Games Arc Five) is the fifth Yu-Gi-Oh! generation. It introduces a new mechanic, known as Pendulum Monsters and the Pendulum Summon. It features its own way of Dueling, the "Action Duel". V stands for five in the name.

Yu-Gi-Oh! ARC-V centers around Yūya Sakaki, a 14 year-old Duelist who tries to escape from the harshness of reality by smiling. But one duel leads him to make a determination to confront the difficulties and he will get the power of infinite possibilities. The show's main theme is "Take a step forward with courage!!"

The story is set in Maiami City on the coast of Japan. Leo Corporation is run by its president Reiji Akaba. Thanks to the spread of the company's "Solid Vision with mass," "Action Duels" are born in Maiami City and has reached worldwide popularity. Children look up to star-level Pro Duelists, and they learn Summoning and Duel styles at various large and small cram schools, including the You Show Duel School that Yūya attends and the largest of such schools, Leo Duel School (LDS).

One day, Yūya ends up fighting an exhibition match with the current champion of Pro Duel world. During the Duel, Yūya's pendant begins to glow, giving him access to a never-before-seen type of summoning called Pendulum Summoning. This causes the Leo Corporation to take an interest in Yūya.

The early episodes focus on Yūya's attempt to become a professional Duelist and follow in his father's footsteps. Yūya must win four matches in a row to qualify for the Maiami Championship. Meanwhile, Yūya's childhood friend, Yuzu Hīragi, encounters a mysterious Duelist who greatly resembles Yūya named Yūto, along with his comrade, Shun Kurosaki, the two are attacking LDS students. Reiji Akaba, also takes interest in Yūya and has been observing him since. During this challenge, Yūya grows as a Duelist and eventually gains entry into the tournament. As the tournament continues, Yūya meets Yūto and another person who looks like him, Yūgo. His encounter with them reveals that their world is separated into four dimensions, three of them based on their summoning methods: Standard, Fusion, Synchro, and Xyz. Currently, Fusion Dimension and Xyz Dimension are at war, with one of Yūya's friends, Sora Shiun'in originated from Academia, a special school in Fusion Dimension.

Following the start of Maiami Championship Battle Royal, Duelists from Fusion Dimension invades the tournament, changing the majority of participants into cards, with only six participants, including Yūya, manages to survive and defeat the invaders. During the invasion, Yuzu was targeted by one of Academia Duelists who also bears resemblance with Yūya named Yūri, but ends up getting transported to Synchro Dimension with Yūgo due to mysterious power of her bracelet. The invasion and Yuzu's disappearance leads Yūya to reluctantly joining Lancers, an elite group formed by Reiji specifically to fight Fusion Dimension so he can find Yuzu and save those who were carded.

Yūya and Lancers goes to Synchro Dimension to find more comrades to fight Fusion Dimension and find Yuzu who got transported there. They arrives at a place called City, where society are separated into two: the wealthy, Tops, and the poor, Commons. They got separated and are targeted by Security, who mistook them as fugitives. They eventually regroup and are forced to participate in Friendship Cup to prove their worth and earn the trust from the people of City by defeating the Duel King, Jack Atlas. While Yūya and his friends competes in the tournament, the chief of Public Security, Jean-Michel Roget is revealed to be a former Academia Duelist who intends to make Synchro Dimension his own personal kingdom. During semi-final match, Academia once again invades to capture Yuzu and Serena.

Serena was successfully recaptured by Academia, while Yuzu was captured by Roget. At the same time, Commons starts to rebel against Tops, turning the whole City into chaos. To save the City, Yūya continue his final match against Jack while the Lancers stops Roget and prevent further riot. Yūya's Duel against Jack succeeds in uniting Tops and Commons, leading to the abolishment of their social status system. In last ditch of effort, Roget tried to destroy Synchro Dimension by transporting it into void between dimensions using his interdimensional transport device, but it malfunctions, sucking him into a wormhole instead. Another malfunction also creates another wormhole that sucks Yuzu, Yūya, Gongenzaka, Shun, and Shingo, sending them to another dimension.

Yūya, Shun, Gongenzaka, and Shingo got transported to Heartland City, separated from Yuzu. There, they encountered Shun's Resistance comrades and Academia's Commander-in-Chief, Edo Phoenix and his squad. After much struggle, with his Entertainment Duel, Yūya managed to persuade Edo and the entire Academia in Heartland to abandon ARC Area Project and help rebuilding Heartland. Hearing that peopled who were carded were sent to Academia, the Lancers departed to Fusion Dimension. At Fusion Dimension, Yuzu was reunited with Yūya's father, Yūshō Sakaki, who had formed an underground Duel School independent from Academia. They decided to attack Academia, but got ambushed in their hideout and got separated as the result. Yuzu reunited with Yūya and the others who have just arrived, and they later also reunited with Serena who has been brainwashed, leading to Yuzu's capture. Regrouping with the remaining Lancers, they successfully infiltrated Academia.

Confronting Leo, the Professor explained the existence of the Original Dimension that got split into four current dimensions after the clash between the Demon Duelist who destroyed it, Zarc, and Leo's daughter who stopped him, Ray. The clash between the two also caused Zarc and Ray to reincarnated into the four dimensions. Yūya, Yūto, Yūgo, and Yūri are the reincarnations of Zarc, while Yuzu, Ruri, Rin, and Serena are the reincarnations of Ray. Leo's goal was to revive his daughter by fusing the girls and the four dimensions, which will lead to the recreation of the original dimension: ARC-V. Despite their best effort, the Lancers failed to stop the dimensional integration and Supreme King Dragon Zarc revived.

Believing that Yūya's soul still exists deep within Zarc, all of Yūya's friends worked together and challenged Zarc to a Duel, but all of them were no match against Zarc's overwhelming power and were defeated one by one. Ray, who wasn't revived completely, borrowed Reira's body to Duel against Zarc and defeated Zarc for good. To prevent Zarc from reincarnating, Reira sealed him inside his own body. The dimension once again divided, and everyone's memories of the whole events are erased and Yuzu doesn't exist in the new Pendulum Dimension. Reiji and Yūshō, who remembers everything, assigned Yūya, Gongenzaka, Shingo, and Tsukikage into a Battle Royale as a reenactment of the previous Battle Royale to return everyone's memories in hope to save Reira who reborn as an infant and the missing Yuzu.

English theme: Can you Feel the Power

The manga is set to begin serialization on the 8/2015 issue of V Jump. It will be written and drawn by Naohito Miyoshi, the artist of the Yu-Gi-Oh! ZEXAL manga.

The manga also contains a one shot chapter, which was published in the 7/2014 issue of V Jump, before the serialization of the long-run manga.

A spin-off manga series named Yu-Gi-Oh! ARC-V The Strongest Duelist Yūya!! has been published in the Saikyō Jump magazine starting from April 2015. This story is non-canon to the anime series, focusing on a more childish and humored plot, and is written and drawn by Akihiro Tomonaga, who was also responsible for the Yu-Gi-Oh! ZEXAL spin-off manga, Yu-Gi-Oh! D Team ZEXAL.

ARC-V mentioned in the V-Jump magazine.

Add a photo to this gallery 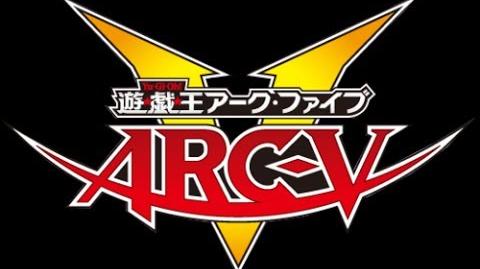 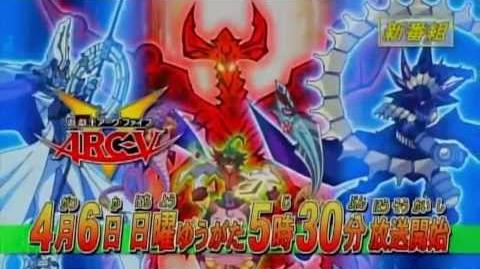 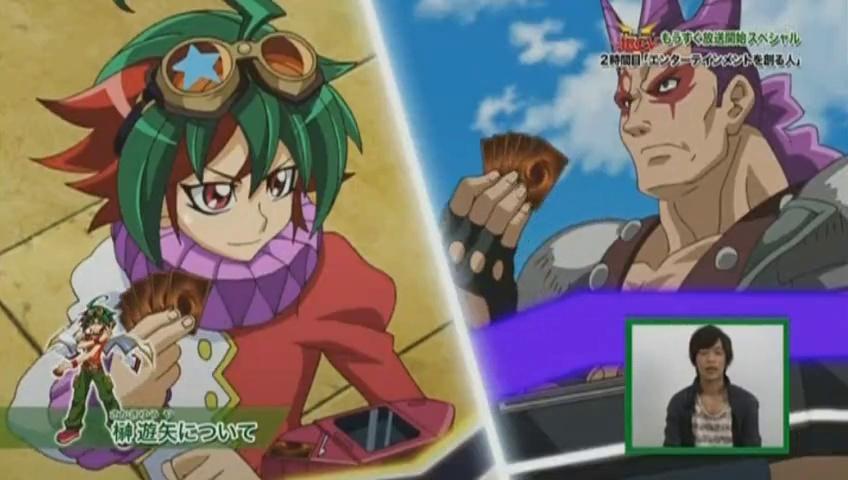 Retrieved from "https://yugioh-arcv.fandom.com/wiki/Yu-Gi-Oh!_ARC-V?oldid=120310"
Community content is available under CC-BY-SA unless otherwise noted.